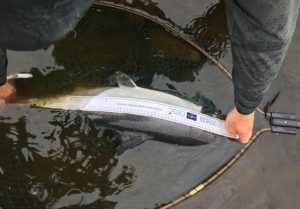 The key aim of  releasing salmon is to ensure that they survive to spawn. Numerous angling and radio tracking studies have demonstrated high survival rates and successful spawning for salmon released after capture (up to 100% in certain conditions). However, if a fish is poorly handled or kept out of the water for a prolonged period, its chance of survival is reduced. To give your fish the best chance of fully recovering from its capture and going on to spawn successfully, please follow the catch and release best practice guidance below.

It is important that fish are handled correctly. By following the advice below, you will give them the best chance of going on to spawn successfully:

Recent studies have shown that when done correctly, catch and release had little or no effect on the reproductive capacity of the freed salmon. With an average sized hen salmon weighing 10 pounds producing approximately 5,000 eggs, catch and release can make a significant contribution to salmon conservation.