Catch returns are the main indicator of adult run size available for the Ness system. Catch statistics are collected annually by Marine Scotland Science (MSS). DSFBs are also able to collect data directly from proprietors twice per year. The size of the run can be used as a measure of its status by comparing the annual run against a long-term average. The data used throughout this section are Crown copyright, used with the permission of MSS, who are not responsible for interpretation of these data by third parties.

Scottish Government figures show a steep decline in salmon rod catches since a record high of 110,496 fish in 2010. The total reported catch for 2018 was just 37,196 fish, 67 per cent of the previous 5-year average and the lowest since records began in 1952. 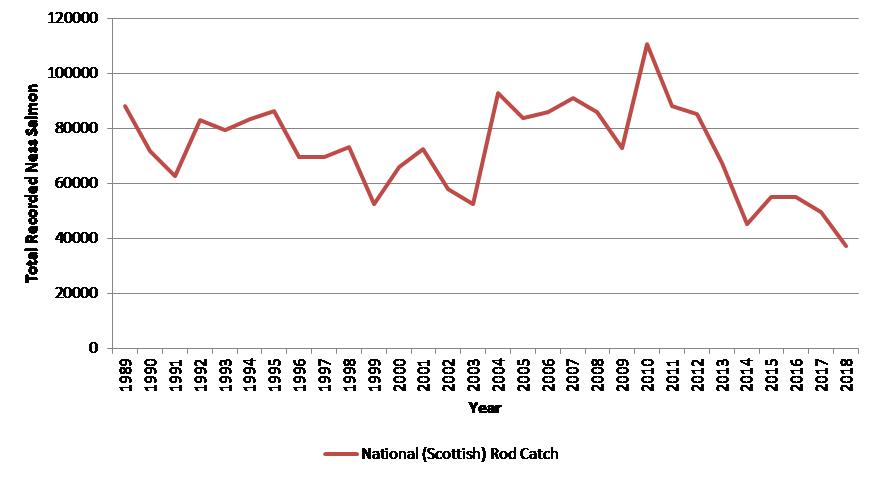 The scale of the decline in 2018 was undoubtedly influenced by a prolonged dry spell. However, a more general decline can be seen in other data sets such as those from fish counters. A similar pattern has also seen in other countries, suggesting a worrying decline in Atlantic salmon numbers across their native range. Fisheries Management Scotland (FMS) believe that the survival of Scotland’s wild salmon is at “crisis point”.

Salmon rod catches for the Ness district salmon mirror the national and international decline. A provisional total of 723 salmon were reported in 2019, a significant decrease of 17 per cent on the 866 fish reported in the previous year and well below both the five and ten-year averages (956 and 946 fish respectively). This was the worst rod catch for 20 years (since 595 fish in 1999) and the sixth worst on record.

The season started reasonably well, with a provisional total of 223 ‘spring’ salmon (January to end May) reported in 2019. This represented a 21 per cent increase on the previous year (184 fish in 2017), following a decline over the previous two years. However, spring catches remained below the latest five and ten-year averages (259 fish and 229 fish respectively).

‘Spring’ salmon tend to belong to the populations in the upper part of the catchment. Over half (56 per cent) of the spring fish reported in 2019 were captured on the Rivers Oich and Garry, with the Moriston and Loch Ness also performing relatively well. In recent years increasing numbers of ‘springers’ have also been intercepted on the River Ness as they make their way upstream. This year, although clearly passing through, they were not captured in any great number. 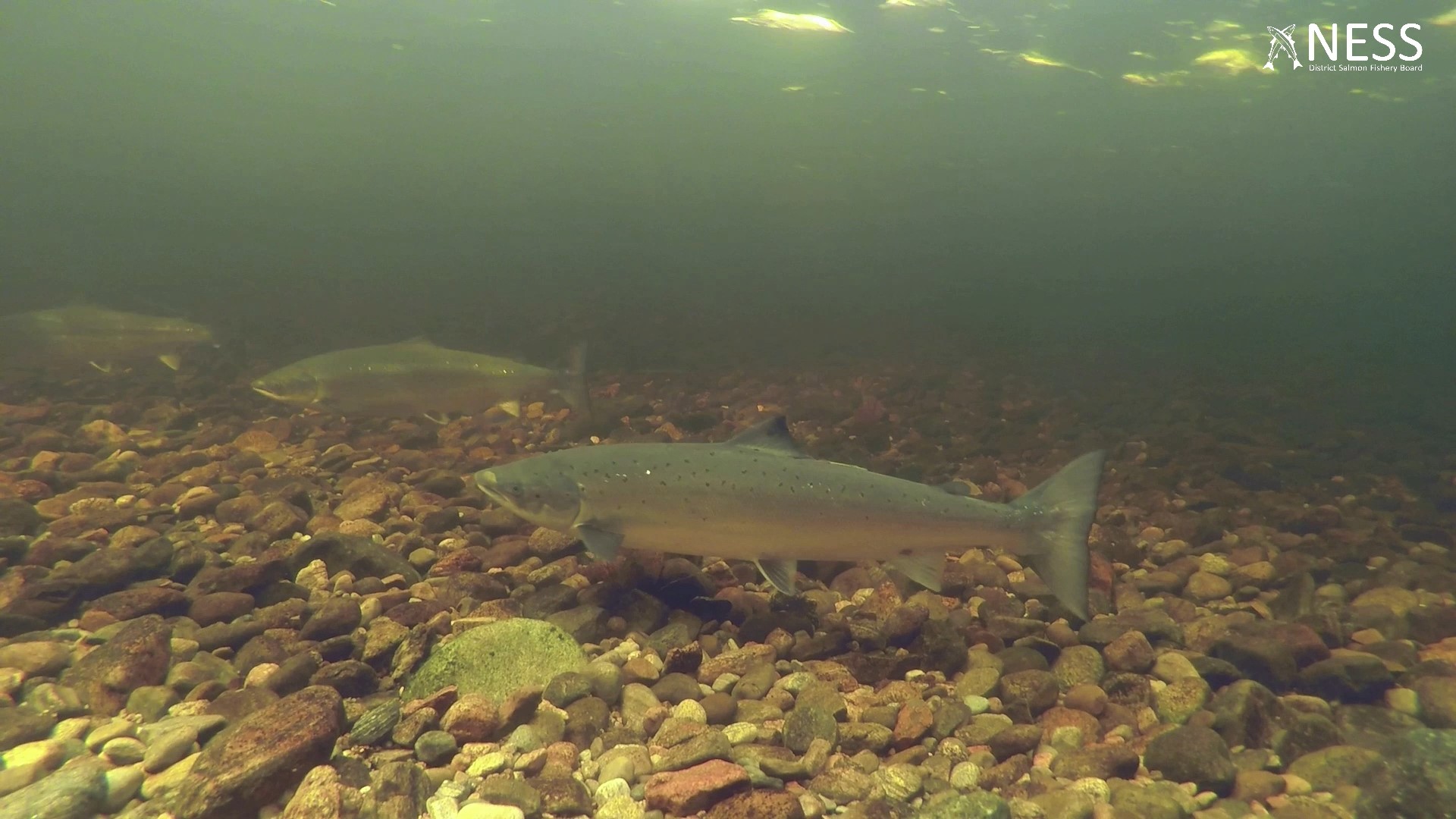 We had seen a steady increase in grilse (one-sea-winter salmon) catches on the Ness system in recent years. However, the provisional 275 grilse reported in 2019 represents a significant and worrying decrease of 36 per cent on the previous year (432 fish in 2018). Catches were also well below both the five and ten-year averages (390 fish and 389 fish respectively). It is not clear what caused this ‘crash’ in grilse numbers, but it will be interesting to see whether this is a Ness specific, national or international issue.

The 448 MSW salmon (including ‘spring’ component’) reported in 2019 represents a slight 3 per cent increase on the previous year (434 fish in 2017). However, despite this increase, catches remained below both the five and ten-year averages (566 fish and 557 fish respectively) and were the joint second lowest on record (equal to the reported catch in 2009).

We are particularly concerned about the current status of the ‘summer’ and ‘autumn’ MSW salmon component (those caught between June and October), which generally belong to populations in the middle and lower parts of the catchment. The 225 summer and autumn salmon reported in 2019 represents a decrease of 10 per cent on the previous year (250 fish in 2018), with catches below both the five and ten-year averages (307 fish and 328 fish respectively).

The Ness district has experienced a long-term decline in summer/autumn MSW salmon catches and it was hoped that the situation had stabilised (with early signs of improvement in 2015 and 2016). Unfortunately, catches have continued to decline, with those for 2019 being the second lowest on record (only beaten by the 158 fish reported in 1955).

The Moray Firth once supported a prolific rod and line fishery for sea trout, with the total annual reported Ness district catch peaking at 3,540 fish in 1960. Reported catches have steadily decreased since that point, although it seems that there may be continued and significant ‘under reporting’ of sea trout catches in the Ness district. 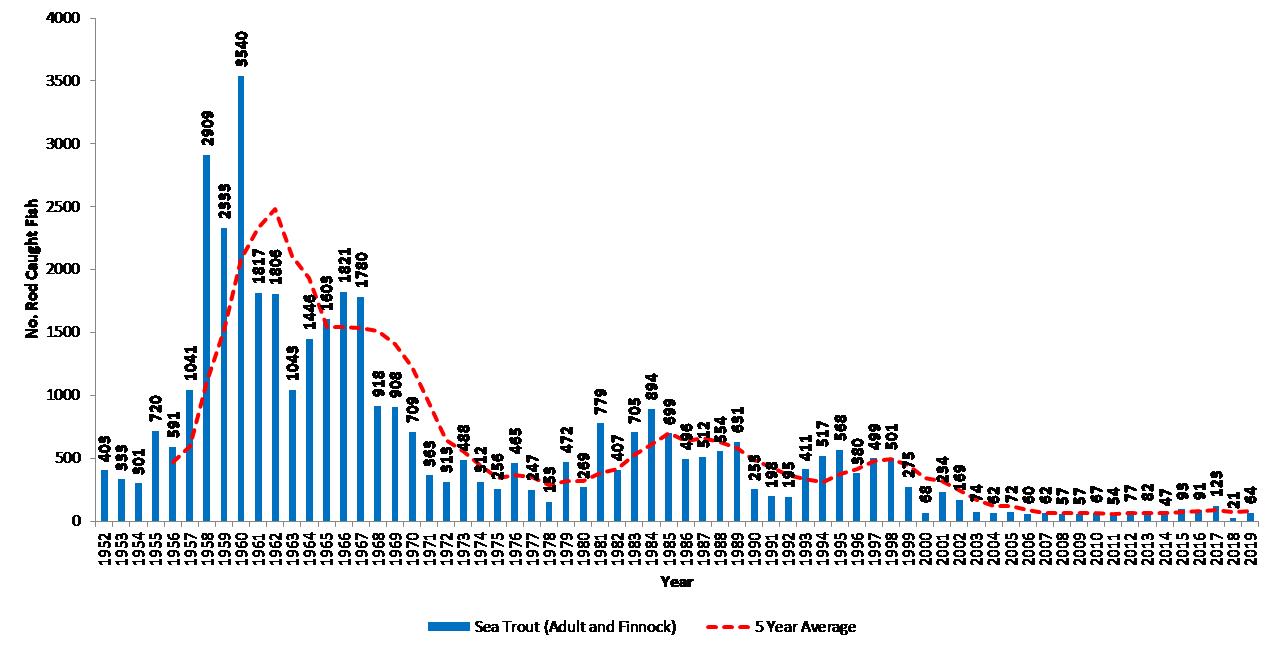 Anecdotal evidence suggests that the numbers of fish captured in the freshwater and coast areas of the Ness system during the 2019 season was significantly greater than the reported 64 fish. From a local fisheries management perspective, this is particularly disappointing particularly as rod catches are the only current indicator of the status of sea trout populations in the Ness system. We would urge proprietors and anglers alike to record and report all sea trout. 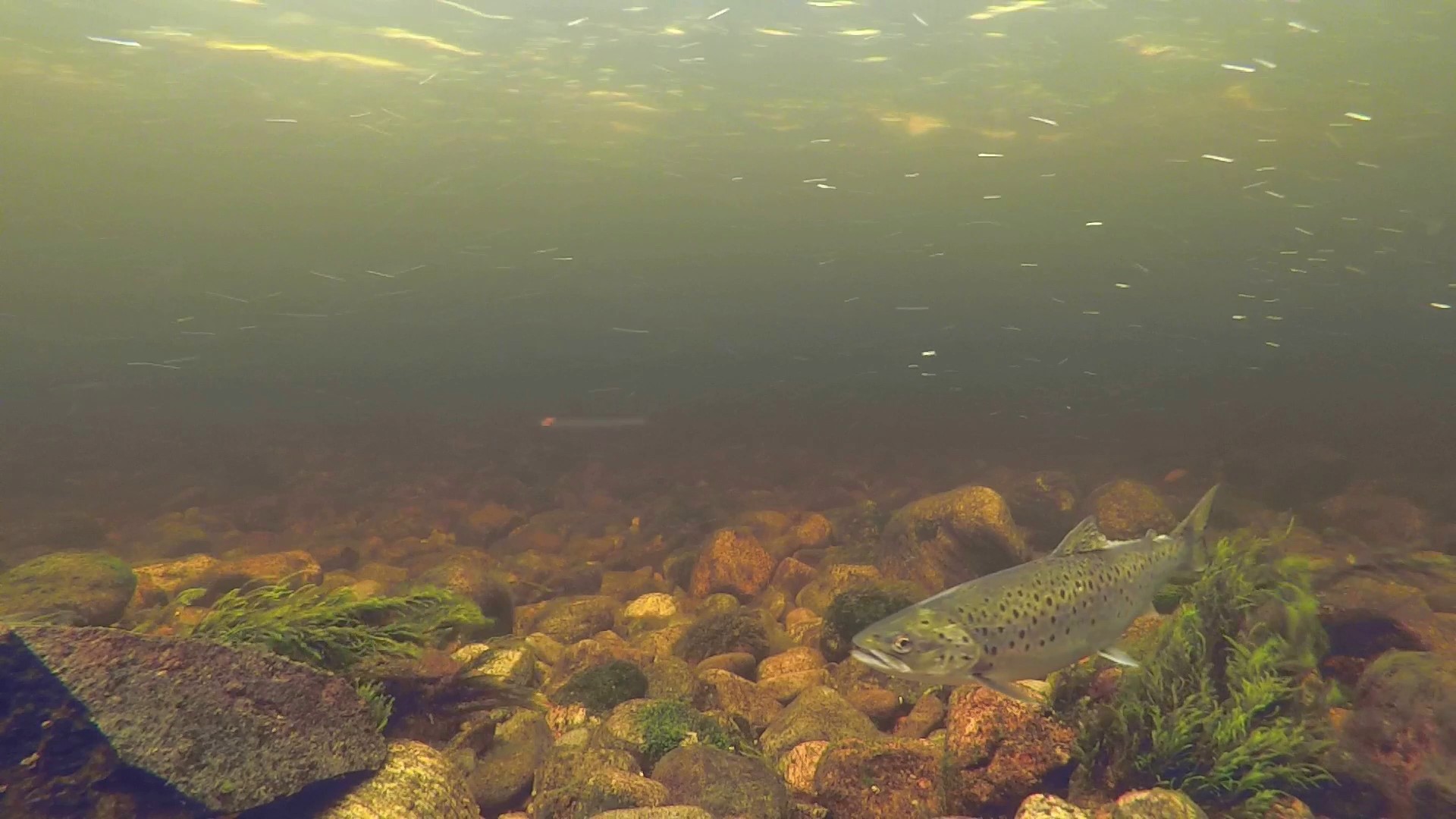 Many of the original salmon netting stations in the Ness district were ‘bought out’ by the Atlantic Salmon Conservation Trust (ASCT) in the 1980. This resulted in a significant reduction in the total numbers of net caught salmon reported in the district. Those remaining are net and coble fisheries, which use a ‘sweep net’ paid out from a boat and worked from the shore. A conservation agreement was reached between the Ness and Beauly DSFBs and the two main operators (Rosemarkie and Longman Stations) in 2013. This meant that these stations remained closed for the entire season. This agreement has continued on an annual basis, with no commercially caught salmon reported by the Ness district fishery for the last seven years.

Reported national (Scottish) catch and effort for the fixed engine and net and coble fisheries in 2019 were among the lowest recorded by either fishery since records began in 1952. There is currently a moratorium on coastal bag net fisheries. Catches for the fixed engine (119 fish from the Solway Haaf net fishery) and net and coble fisheries (3,751 fish) were the third and fifth lowest, respectively, whereas reported effort for each fishery was the lowest in the respective time series.

The 2019 salmon fishing season on the Ness system was particularly challenging, with little improvement in catches of multi sea winter salmon and a decline in grilse catches. The spring component showed a modest improvement on the previous year, although catches remained below the five and ten year average.

The current decline in salmon catches is not limited to the Ness district, with similar trends seen in rivers across Scotland and the North Atlantic. Research suggests that the key driver for this decline relates to changes in the marine environment. However, freshwater factors such as predation and barriers to migration can also have a significant impact on salmon populations.

With management options in the ocean limited, the Ness DSFB aims to maximise the number of ‘healthy’ wild salmon smolts going to sea from our rivers.