On the 20th August 2019, Marine Scotland announced that the Scottish Ministers propose to continue to regulate the killing of salmon in Scotland for the 2020 fishing season, including the prohibition on retaining any salmon caught in coastal waters, by means of conservation regulations made under section 38 of the Salmon and Freshwater Fisheries (Consolidation) (Scotland) Act 2003.

In the past the Scottish Government has applied a two-phase approach to the Ness system, with a lower grade on the River Ness up to the 1st July to protect the early running Moriston fish. This year they have moved away from this and applied the status of the Moriston to the rest of the Ness system for the entire season. 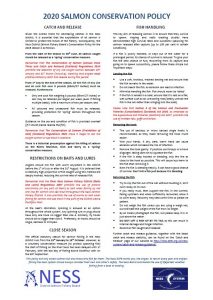 The Scottish Government recognises that we already have an effective local Conservation Policy in place. However, a general failure to adhere to the existing policy, or a significant decline in release rate, may lead to mandatory catch and release being enforced by the Scottish Government in future years. 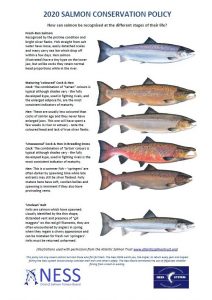 Given the points above, the Ness DSFB has continued with its existing Conservation Policy for the 2020 season, rather than tightening it any further. It is hoped that with the full support of fisheries and anglers, this will strengthen our ability to protect our salmon populations, without putting any additional pressure on the socio-economics of the fishery. The full ‘2020 Salmon Conservation Policy’ can be found here. 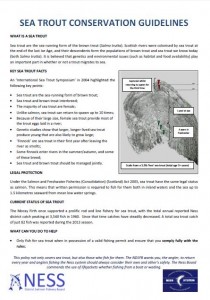 Further to the above, it is clear that our sea trout catches are in continued decline and at extremely low levels. As such, we have produced new ‘Sea Trout Conservation Guidelines’. This aims to raise awareness of key sea trout facts, their legal protection, current status and what anglers can do to help (click on picture to view or download).