The Pacific pink salmon (Oncorhynchus gorbuscha) is native to Pacific and Arctic coastal waters and rivers, from the Sacramento River in northern California to the Mackenzie River in Canada; and in the west from the Lena River in Siberia to Korea and Honshu in Japan. They were introduced to some Russian rivers in the Barent and White Sea areas between the 1960s and 1990s. They have slowly spread westwards and have now colonised some northern Norwegian rivers where self-sustaining populations have now established. Small numbers of pink salmon have turned up in UK rivers for several decades, but this year has seen by far the largest number of fish captured in any single year.

On the 6th July 2017 the Ness DSFB received the first report of a pink salmon being caught by rod and line on the River Ness at Ness Side Estate. The angler described the fish as short, fat and silver with a very spotty tail. It weighed approximately 2.75 pounds and was photographed by an estate ghillie who, having seen reports of recent catches in Irish waters, realised that it may have been a pink salmon. This very quickly resulted in a second report of pink salmon having been caught the previous day by an angler in the Blackstream at Ness Castle Lodges, approximately one kilometre further upstream. The angler had released it back to the river without taking a photograph, at the time believing that it was an unusual looking Atlantic salmon. A total of eight rod caught fish were reported on the River Ness during the 2017 rod fishing season.

Photographs of Pacific pink salmon caught on the River Ness in 2017 (fresh fish on the top row, mature and spent fish on the bottom)

Scales retained from the fish were examined by Ness DSFB staff. They were found to be significantly smaller than that of the Atlantic salmon, with no defined freshwater growth. This indicates that the fish had rapidly migrated to the sea after hatching, which is consistent with the lifecycle of the pink salmon.

The fish were all found to have a total age of 1+ years, which is also consistent with the two-year lifecycle of the pink salmon. The growth patterns on the scales allowed us to conclude that the eggs of these fish were laid in late summer 2015, emerged in late winter/early spring 2016 and arrived in the River Ness in mid-summer 2017. There was no erosion on the edge of the scales taken from the fresh fish, indicating that they had spent very little time in freshwater. Those from the mature fish exhibited advanced erosion. This is due to the fact that the fish had stopped feeding and were re-absorbing their scales as a source of minerals. The carcasses of a number of pink salmon were handed in to the Ness DSFB for closer examination. This included that of a five-pound female in breeding colours caught on the 26th July 2017. Internal examination indicated that fish had a little further to go before spawning and we estimated that it contained approximately 1,700 eggs. No signs of internal damage were noted and there were no obvious signs of parasites or disease. The gut and stomach were completely empty, suggesting the fish had not fed recently and had been in freshwater for some time (confirmed by examination of scales).

Two further female pink salmon caught on the River Ness on the 16th August 2017 were found to have already spawned and deposited their eggs. They both had damage to their tail (caudal) fins resulting from cutting ‘redds’ (or nests). Following our examinations, all the fish was delivered to the UHI Rivers and Lochs Institute where they have been frozen pending further investigations.

Following the capture of mature male and female fish in spawning colours, the Ness DSFB decided to position an underwater camera in the River Ness to monitor potential spawning activity. On the 8th August 2017 a lone female pink salmon was recorded passing the camera. The fish was in spawning colours and it was clear that she was close to spawning. A male with its distinctive hump was subsequently caught on camera on the 10th August 2017.  The first signs of actual spawning activity were recorded on the 11th August 2017 when a spent female pink salmon was seen exhibiting ‘cutting’ behaviour on a ‘redd’ (or nest), with the actual fertilisation of eggs recorded on the 14th August 2017 (a UK first). Identification and Marking of ‘Redds’ (or nests)

Once spawning was confirmed, we carried out surveys to establish the location of as many of the pink salmon ‘redds’ as possible. This involved the use of an aerial drone, together with walk over surveys to confirm that what the drone was seeing were in fact pink salmon ‘redds’. We looked for clean areas of river gravel where the female fish had created a depression with her tail in which to lay her eggs (marked with a red dot on the image below). These areas contrasted against the darker undisturbed areas of river bed which were coated in a layer of algae. Image from an aerial drone survey carried on the River Ness on the 20th August 2017, with Pacific pink salmon ‘redds’ (or nests) clearly visible (shown in red)

Once confirmed, we began marking the location of known Pacific pink salmon ‘redds’ with streamer tape in anticipation of any future opportunities assess the viability of their eggs.

On the 4th September 2017 a total of 200 Pacific pink salmon eggs were recovered from nests (or ‘redds) in the River Ness as part of an ongoing assessment of viability. The majority were found to have developed to ‘eyed ova’ stage. This meant that they were successfully fertilised and were close to hatching. A number of empty shells were also recovered initially leading us to conclude that some may have already hatched, however this was more likely to have been a result of eggs rupturing during the recovery process. 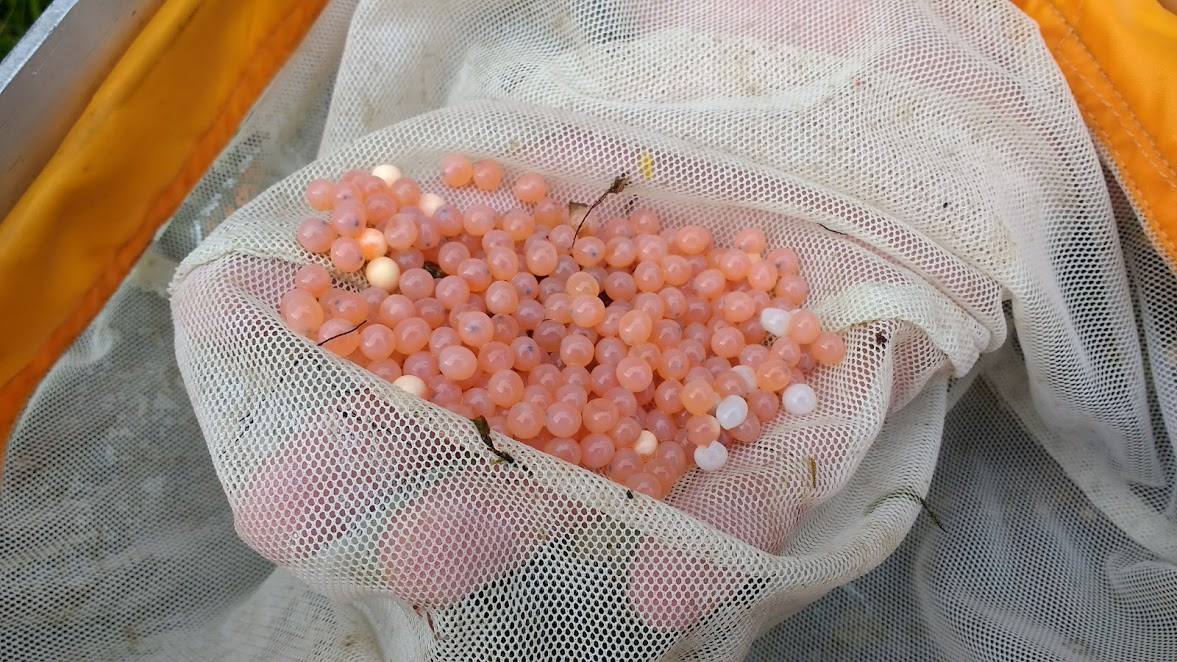 The eggs were transferred into two fully enclosed in-stream incubation chambers provided by MSS and under licence from SNH (100 eggs in each). These were buried in the river gravel together with two temperature loggers (one above and another below the gravel). This would allow us to monitor the survival of the eggs, together with the time and temperature at hatching and emergence (the point at which the fry swim up from the gravel).

The eggs were regularly checked by removing the incubators and emptying the contents into white trays for closer inspection. A newly hatched Pacific pink salmon ‘alevin’ was recorded on the 23rd September 2017, the first ever record of natural hatching in the UK. Further eggs were found to have hatched in subsequent days and, although survival was low (approximately three per cent), a number of the alevins were developing well and beginning to develop a silver colouration in preparation for their seaward migration.

On the 15th November 2017 we found that none of the fish had gone on to survive to the point of emergence (when they swim up from the gravel). Despite the mortalities experienced in the incubation boxes, we believe it likely that at least a small proportion of pink salmon contained in natural ‘redds’ in the River Ness will go on to emerge. It seems that this may occur earlier than it would in their natural range (November/December rather than April/May). This may reduce their chances of survival in the marine environment. 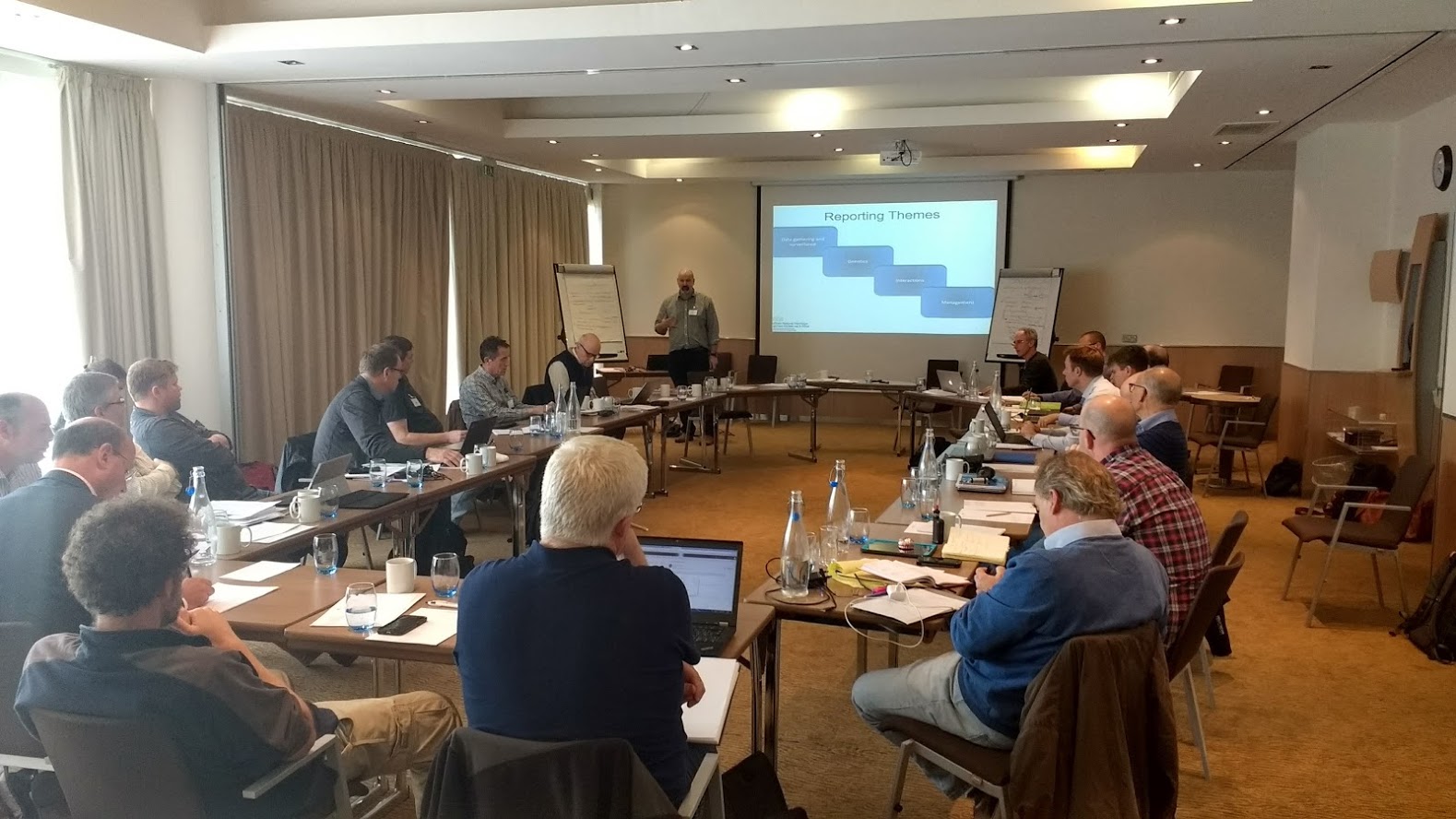 Unprecedented numbers of pink salmon were reported across the range of countries in 2017. A total of 139 Pink salmon were recorded across Scotland in 2017 (75 rod and line; 24 commercial nets; 26 targeted netting; 8 observed).  A further six dead fish were also reported. There is some evidence of fish moving as far as 50 km upstream in the River Dee (Aberdeenshire), where attempts were made to excavate eggs and manually disrupt redds. Some of these eggs were removed and are being monitored by MSS at various temperatures under laboratory conditions to assess hatching success.

A minute of the meeting has been produced by SNH and can be viewed here.

We don’t know for sure why pink salmon arrived in such numbers this year. It may be a one-off and the result of an exceptionally strong year class for this species in Russia, or it may become a more regular feature. We need to keep an open mind and gather as much information as we can. Due to their two-year lifecycle, the progeny will be derived from distinct ‘odd’ or ‘even’ years, with the Russian/Norwegian fish being odd-year stocks. It is therefore possible, and likely, that they will occur again in 2019.