The number of mainstem survey sites has been increased from three to 10. This aims to provide greater resolution and sample a broad range of habitat types. Sampling was carried out using three pass electrofishing without stop nets (river too wide and fast). 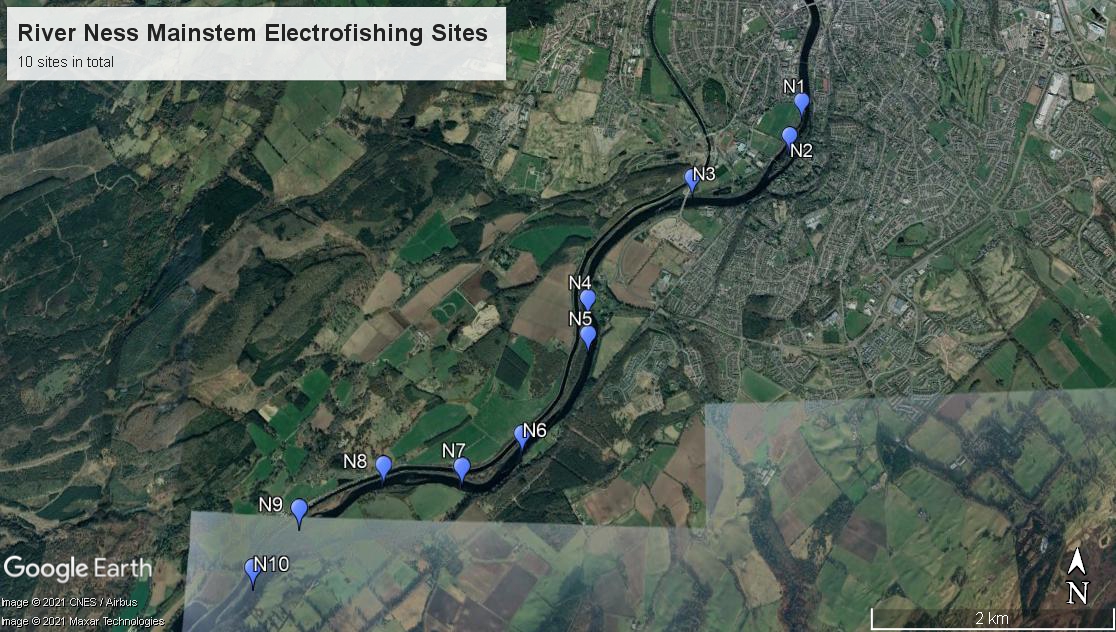 The ratio of fry (0+ year old) to parr (1+ year old) densities (minimum estimates) varied from site to site with the given habitat (depth, substrate size, flow, etc), with most more suitable for one than the other. Overall, despite a decline in rod catch, juvenile populations seem to be relatively healthy and as expected. 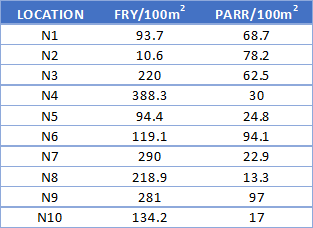 The fry densities recorded in 2021 varied from a low of 10.6 per 100m2 at N2, to a high of 388 per 100m2 at N4. The difference in densities relates to variations in habitat types between sites. If a fish has spawned in the proximity of the survey reach, then fry densities will be higher. Overall, with an average fry density of 185 per 100m2, the mainstem populations seem to be relatively healthy. 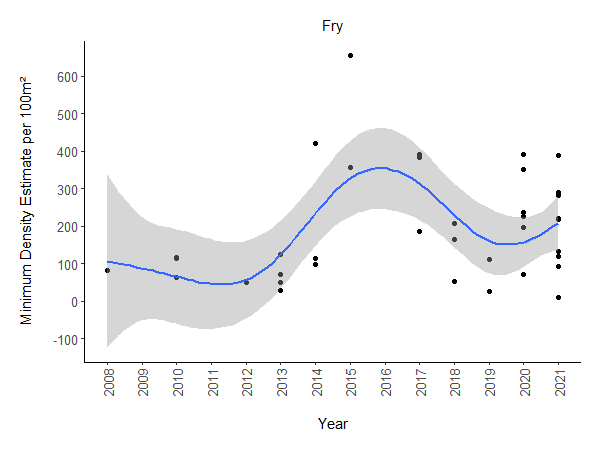 Parr abundance gives a much better indication of the general ‘health’ of juvenile salmon populations, because at this stage the fish have distributed across the available habitat. The parr densities recorded in 2021 varied from a low of 13 per 100m2 at N8, to a high of 97 per 100m2 at N9. Once again, the difference in densities was predictable and relates to  the predominant habitat types at each site. Overall, with an average parr density of 51 per 100m2, the population seems to be relatively healthy. 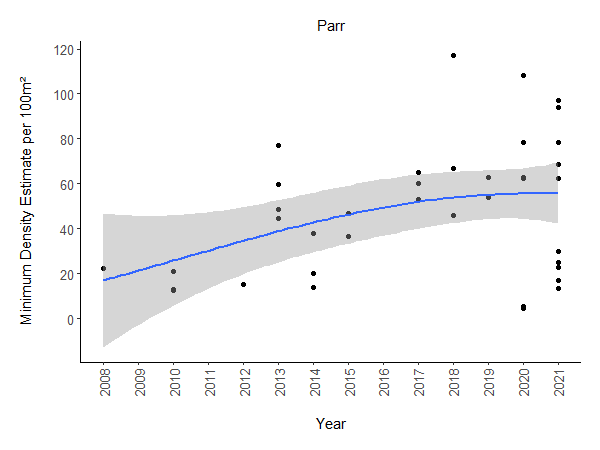 We are often asked why the juvenile salmon population in the River Ness is still classed as being relatively heathy, despite an obvious decline in the number of returning adults (or spawners). Key to this is understanding the concept of the ‘carrying capacity’ of the river.

The size of a juvenile salmon population can only grow until it reaches the carrying capacity of its environment. At that point, resources (such as food and shelter) will not be sufficient to allow the population to continue growing over the long-term. This means that, even with increasing numbers of adult spawners, the numbers of smolts escaping from the river will remain constant.

To illustrate this, we have plotted the rod catch for the mainstem River Ness against the densities of salmon fry (0+ year old) and parr (1+ years old) recorded during our electrofishing surveys on the River Ness. 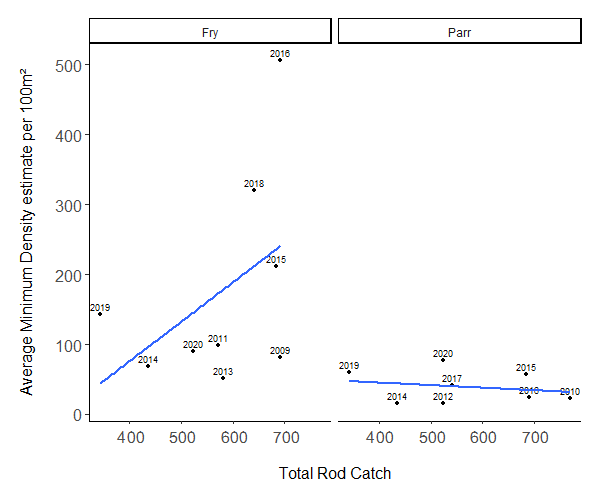 The results indicate that the higher the rod catch (number of spawners) in a given year, the higher the resulting density of salmon fry. However, no matter how many spawners or fry you start with, the parr densities remain at a similar level and do not continue to increase. This suggests that, in terms of parr, the available habitat in the Ness mainstem is likely to be at or above carrying capacity at the moment.

We will continue to use all of the appropriate options in our fisheries management ‘tool box’ to maximise the survival of salmon eggs and fry to the parr and smolt stage. However, it seems that investigating options for maximising the availability of parr habitat may be key to this, i.e. the greater the available habitat, the greater density of parr that the river can support. This is where the ‘River Ness Habitat Restoration Feasibility Study’ comes into play.