Catch returns are the main indicator of adult run size available for the Ness system. Catch statistics are collected annually by Marine Scotland Science (MSS). DSFBs are also able to collect data directly from proprietors twice per year. The size of the run can be used as a measure of its status by comparing the annual run against a long-term average. The data used throughout this section are Crown copyright, used with the permission of MSS, who are not responsible for interpretation of these data by third parties.

The latest Scottish Government figures show a steep decline in salmon rod catches, since a record high of 110,496 fish in 2010. The total reported rod catches for 2019 was 47,515; 97% of the previous 5-year average and the fourth lowest since records began in 1952. 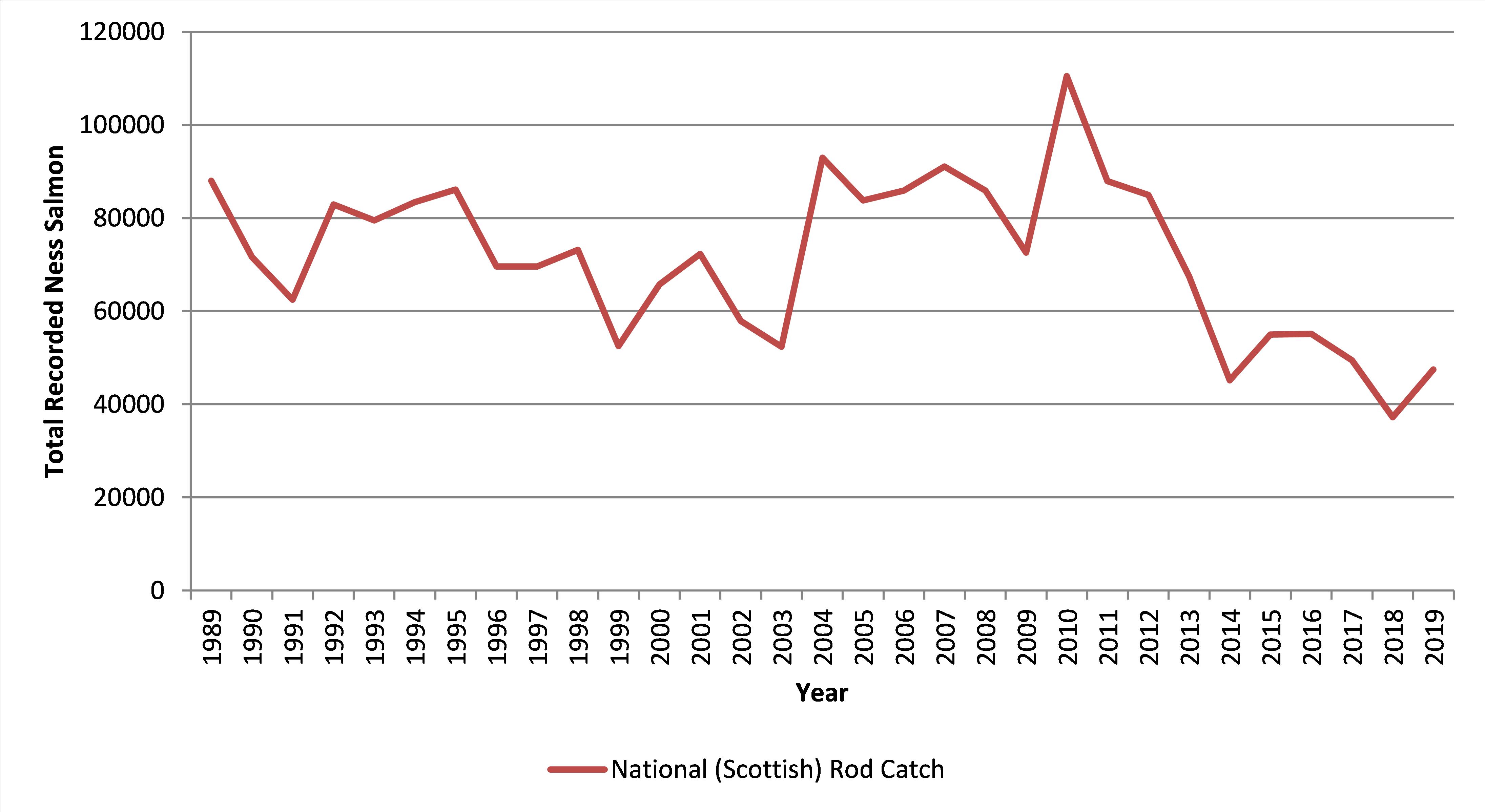 The proportion of the rod catch accounted for by catch and release was among the highest recorded, with 98% of rod caught spring multi sea-winter fish (taken before 1 May) and 92% of the annual rod catch released. It should be noted that some of the fish released may be re-caught and hence inflate the catch statistics.

Spring catch has declined since records began. Although there is some indication of a stabilisation, it remains at a low level. Summer and autumn catch generally increased up to 2010, subsequently falling sharply, before a slight recovery in 2015 and 2016. It fell again in 2017 and 2018, increasing slightly in 2019.

As a result of the Salmon Conservation Regulations, retention of salmon caught in coastal waters has been prohibited since the 2015 season. Reported catch and effort for the fixed engine and net and coble fisheries in 2019 remain among the lowest recorded. In 2019, reported catches for net and coble fisheries were the lowest on record, whilst those for fixed engine fisheries were the fourth lowest.

A general decline in the numbers of returning adult salmon can be seen in other data sets, such as those from fish counters, and there has been a worrying decline in Atlantic salmon numbers across their native range. Fisheries Management Scotland (FMS) believe that the survival of Scotland’s wild salmon is at “crisis point”. The Scottish Government’s chief freshwater scientist has warned that, at the current rate of decline, Scottish Salmon could disappear within 20 years.

The 2020 season started reasonably well, until the evening of the 23rd March 2020, when the COVID-19 lockdown and associated travel restrictions came into force. This resulted in a complete closure of all fisheries until the end of May 2020.

This had a major impact on this year’s ‘spring’ catches (January to end May), with a provisional total of just 51 ‘spring’ salmon reported in 2020. This compares to a previous five-year average of 259 spring salmon and general stabilisation in catches (although still at relatively low levels).

Scotland’s First Minister announced an easing of the lockdown and resumption of limited angling activity on the 29th May 2020. This meant that local anglers could first return to the river, followed shortly after by visiting anglers. However, fishing effort continued to be significantly lower than in previous years, with visiting angler numbers significantly reduced.

Despite the effects of COVID-19 described above, the provisional total of 767 salmon and grilse reported in 2020 represented a six per cent increase on the previous year (723 fish). It is likely that without the COVID-19 lockdown, this would have been one of the best years for 10 years, however as it stands the catches were below both the five- and 10-year averages (867 and 906 fish respectively).

Grilse (one-sea-winter salmon) catches were the third highest for 10 years, with the provisional 415 fish reported in 2020. This represents a 34 per cent increase on the previous year (275 fish in 2019), with grilse catches above both the five and ten-year averages (370 fish and 374 fish respectively) despite the impacts of COVID-19.

The 352 MSW salmon (including ‘spring’ component) reported in 2020 represents a 21 per cent decrease on the previous year (448 fish in 2017). This is due to the two-month complete closure of the fishery over the peak spring period. Unsurprisingly, catches were below both the five and ten-year averages (498 fish and 532 fish respectively) and the lowest on record.

The ‘summer’ and ‘autumn’ MSW salmon component (those caught between June and October), are believed to belong to populations in the middle and lower parts of the catchment. Following a long-term decline, the provisional 301 summer and autumn MSW salmon reported in 2020 represents an encouraging increase for the first time in five years. This is above the five-year average (293 fish), but below the ten-year average and (312 fish). However, catches of summer and autumn MSW salmon remain well below historical levels, with those for 2020 being the fourth lowest on record.

The Moray Firth once supported a prolific rod and line fishery for sea trout, with the total annual reported Ness district catch peaking at 3,540 fish in 1960. Reported catches have steadily decreased since that point, which we believe is largely due to continued and significant ‘under reporting’ of sea trout catches. 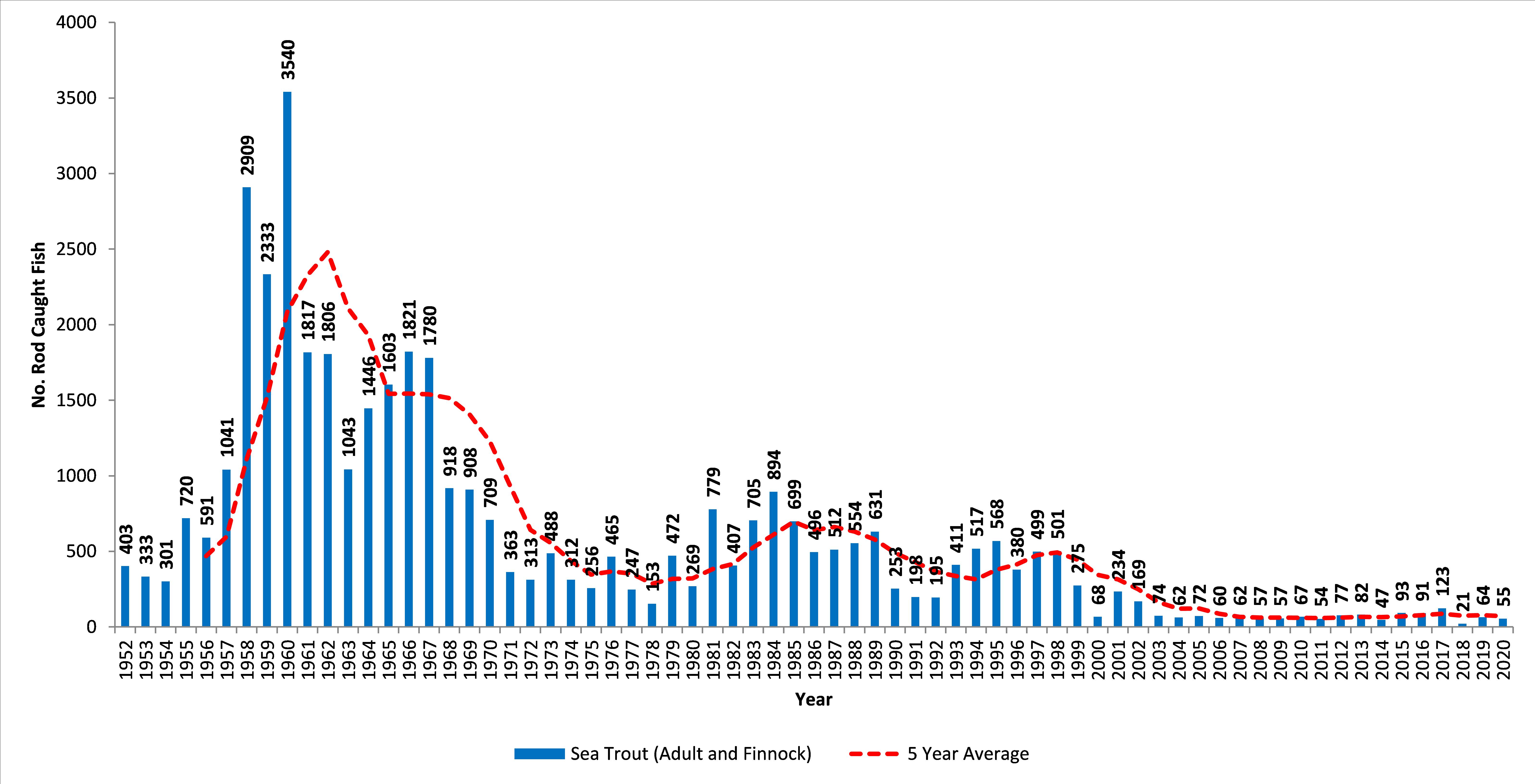 Anecdotal evidence suggests that the numbers of fish captured in the freshwater and coast areas of the Ness system during the 2020 season was significantly greater than the reported 55 fish. From a local fisheries management perspective, this is particularly disappointing particularly as rod catches are the only current indicator of the status of sea trout populations in the Ness system. We will be taking measure to resolve this issue.

Many of the original salmon netting stations in the Ness district were ‘bought out’ by the Atlantic Salmon Conservation Trust (ASCT) in the 1980. This resulted in a significant reduction in the total numbers of net caught salmon reported in the district. Those remaining are net and coble fisheries, which use a ‘sweep net’ paid out from a boat and worked from the shore.

A conservation agreement was reached between the Ness and Beauly DSFBs and the two main operators (Rosemarkie and Longman Stations) in 2013. This meant that these stations remained closed for the entire season. This agreement continued on an annual basis until 2019, with a pause in 2020 due to the impacts of COVID-19. No commercially caught salmon have reported by the Ness fishery for the last eight years.

With salmon numbers already in decline across the North Atlantic, the additional impacts of COVID-19 made this an extremely challenging fishing season.

The national COVID-19 lockdown, and associated travel restrictions, completely closed the fishery for a full two-month period. This coincided with the peak ‘spring’ fishing period (April and May), significantly impacting upon catches (particularly in the upper system). Fishing effort continued to be much reduced even when partial lifting of the lockdown came into effect.

Despite significantly lower fishing effort throughout the season, the provisional total catch for 2020 exceeded that of the previous year. Grilse catches were the third highest for 10 years and there was an encouraging increase in catches of summer and autumn MSW salmon for the first time in five years. If COVID-19 hadn’t struck, then this would have likely been a relatively good year for the Ness system.

Research suggests that the key driver for the background decline of salmon across Scotland and the North Atlantic relates to changes in the marine environment. However, freshwater factors such as predation and barriers to migration can also have an impact.

With management options in the open ocean limited, the Ness DSFB aims to maximise the number of ‘healthy’ wild salmon smolts going to sea from our rivers. The following sections of this report illustrate how we are working to identify and address those factors which may be limiting spawning success and juvenile survival in the Ness system, together with the practical management actions being taken to maximise smolt escapement.