Pioneering genetic profiling is being used for the first time to supply real-time data aimed at boosting Atlantic salmon numbers in the Upper Garry waters.

The first hatchery-reared eggs from the ‘Upper Garry Salmon Restoration Project’ have been stocked into the river by the Ness District Salmon Fishery Board. 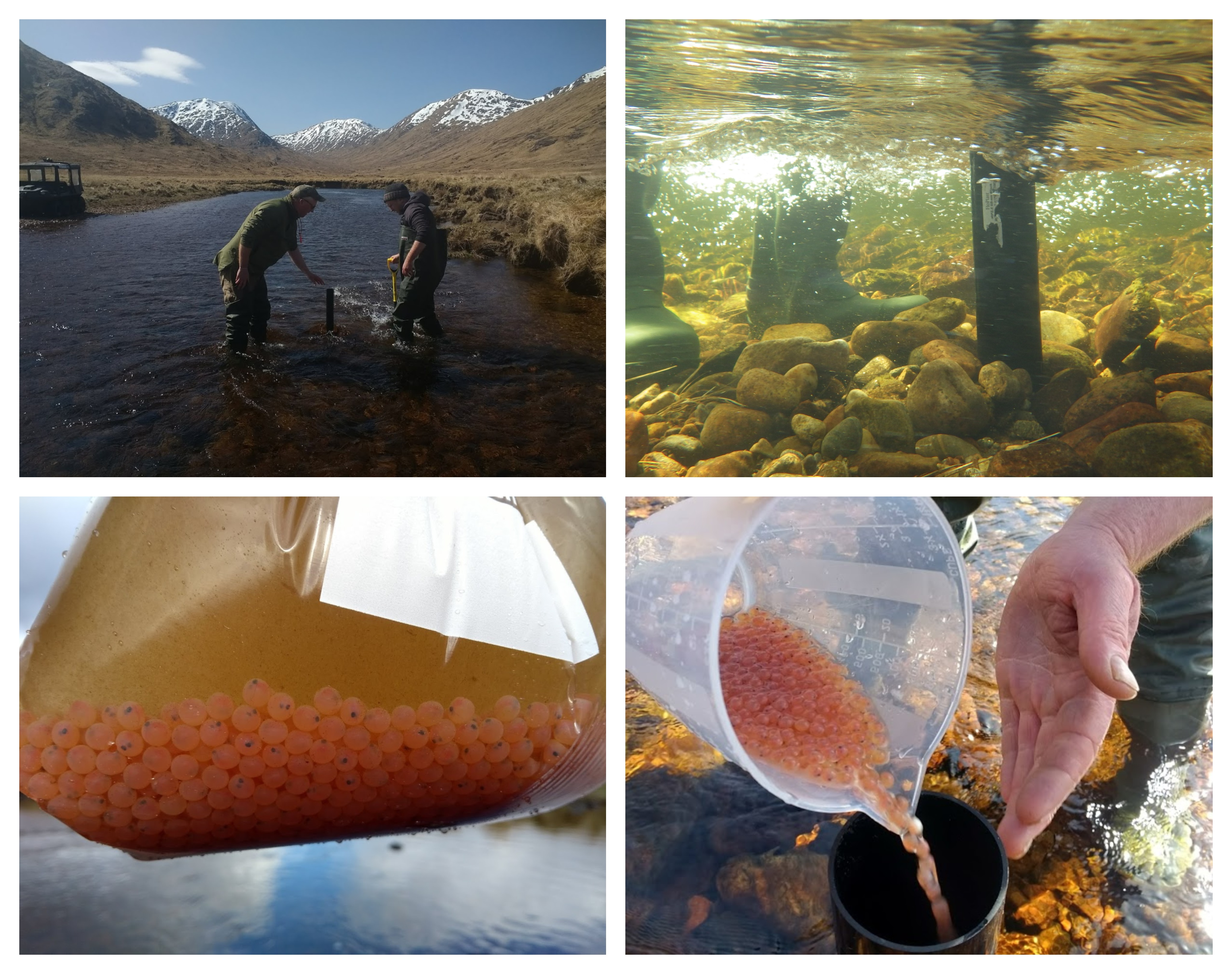 Wild River Garry salmon ‘smolts’ were captured as they made the journey downstream towards the sea in spring and grown on to maturity in captivity at the Drimsallie Salmon Hatchery in Lochaber. This has allowed the lead-in time for advanced genetic profiling to ensure the fish used in the project are of the ‘correct’ stock. 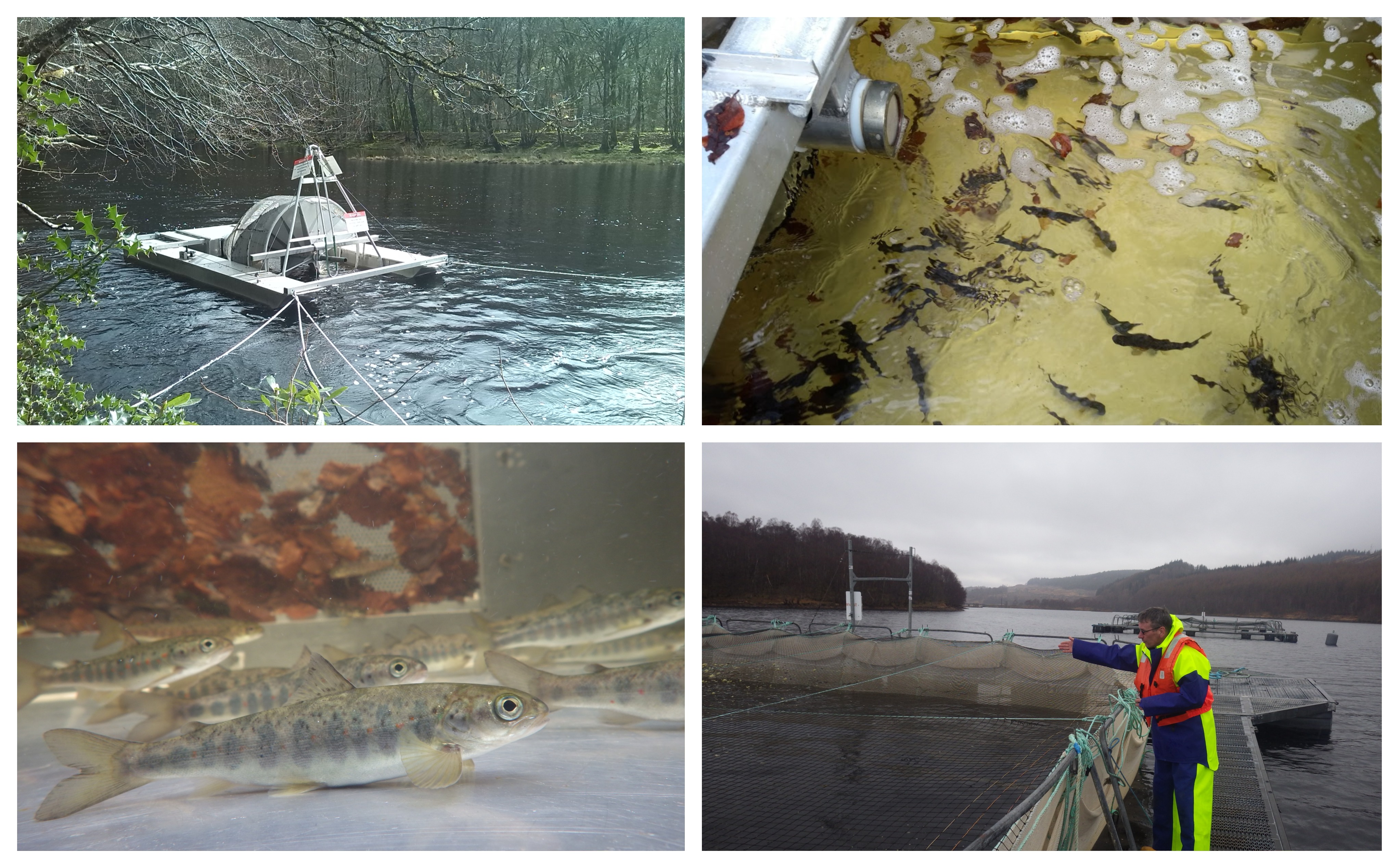 Capture of wild River Garry salmon smolts during their downstream migration, with the fish temporarily held in a pen on Loch Garry.

Once the target number of smolts had been captured they were transferred to Drimsallie Hatchery in Lochaber, introduced to an artificial pellet diet and grown on to maturity in freshwater. “This is the first time in Scotland that applied genetics has been used to inform fisheries management practices in real-time”, revealed Chris Conroy, director of the Ness Board.

“Historic annual returns of up to 800 adult salmon annually through the fish counter at Garry Dam have shrunk to an average of 60 fish. This has triggered our multi-partner bid to reverse that trend.

“We’ve been developing this innovative fisheries management project quietly behind the scenes since 2012 and the introduction of the first eggs is a huge step forward.”

Each smolt, when captured, is fitted with a passive integrated transponder (PIT) which allows each fish to be identified in future. “These PITs, along with tissue samples, allows for genetic analysis”, said Professor Eric Verspoor, director of the Rivers and Loch Institute at Inverness College UHI, part of the University of the Highlands and Islands. “This identified four main groups of Garry smolts and allows us to retain the specific characteristics of each group.

“Genetic profiling also allows us to identify any full siblings. This means we can avoid the negative effects of inbreeding, which is crucial in view of the Upper Garry’s 60-year decline in salmon numbers.”

Because salmon numbers are so low, the eggs of smolts are being ‘planted’ in the river in a four-year bid to kickstart the salmon population.

“Stocking of eggs will focus on areas of suitable habitat identified by fisheries biologists from the Ness and Beauly Fisheries Trust”, said Mr Conroy. “We’ve introduced 23,500 eggs across eight sites this year and we’ll be stocking up to 150,000 eggs each year for the next three years.”

When the eggs hatch they will begin feeding in their natural environment – thus avoiding the harmful effects of young fish becoming ‘domesticated’ in a hatchery. The ground-breaking genetic analysis and supported breeding project is also being backed by Scottish and Southern Energy, the Ness and Beauly Fisheries Trust, Marine Harvest and the Scottish Environment Protection Agency (SEPA).

Dr Alastair Stephen, SSE Environmental Advisor, said: “SSE has committed ten years’ support to this initiative – by using the best scientific advice to get us the best chance of restoring a genetically appropriate stock of fish to the catchment.

“The project is a bold and welcome initiative, harnessing the expertise available to deliver quite a complex plan.

“It’s a refreshing change to deal with a number of groups which have been at loggerheads over the years and are now working together to deliver a sustainable salmon stock back to the upper catchment.

“The Upper Garry Restoration project should be seen as a great example of wild fish interests, fish farmers and hydro interests working with academia to deliver better fish management.”

Steve Bracken, Business Support Manager with Marine Harvest Scotland, explained: “We’re very excited to be involved in this extremely important collaborative work. In our company we do have the people and the facilities that can help with projects like these – but it’s about all the sectors coming together, and their combined input, that makes the difference in driving the project successfully forward.”

Electro-fishing surveys will be undertaken at the stocking sites this summer by the Ness and Beauly Fisheries Trust, allowing an early assessment of the survival rate of the stocked fish.

Benefits won’t be instant – it will not be until six years from now that the fish stocked in this year’s project should return as adults and pass through the fish counter. But this should signal the reversal of a historic trend.